February 17, 2010: Several scenes of "The Calistra Zipper Story" received a NEW MUSIC SCORE written by Steven Mahpar; and on this date I completed laying in the soundtrack. With some new fine tuning, the editing is done.

December 5, 2009: The 2nd Annual Zero Film Festival screened a ten-minute version of my video "Icy Waters" recorded in New York City in 1983 lost for years and finally edited in 2009 at the downtown independent theater in Los Angeles. On December 11th "Icy Waters" was screened in New York City at the Anthology Film Archive, just blocks from where it was recorded 26 years ago at the Young Filmmakers/Video Arts on Rivington Street in the Lower East Side. Based upon my 1980 play, "Icy Waters" stars William Preston and Glynis Bell.

November 24, 2009: The Indie Fest, La Jolla, California announces that the newly edited version of "The Calistra Zipper Story" has won an Award Of Merit for 2009. "The Indie Fest honors professionals, established and emerging, who demonstrate exceptional achievement in craft and creativity."

May 22, 2009: Opening Night of "Madness In Valencia" a play written in 1614 by Spanish playwright Lope De Vega with an clever new English translation. I returned to the stage as Dr. Sancho, head of the first modern insane asylum in this wonderful production by the Sacred Fools Theatre Company in Los Angeles. The show ran through June 28th to delightful audience response and excellent reviews. 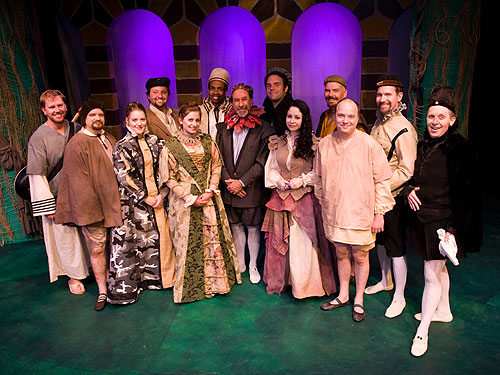 "A lively and colorful production...Craig Calman is appropriately peppery as the governor of the asylum."

"There's an amiable goofiness in Suzanne Karpinski's staging of her 13-member ensemble, and this is the right company to pull off a show so influenced by the Italian Commedia clowning....terrific performances."

"The Calistra Zipper Story" will be screened on March 27th at Club CIA in North Hollywood! 11334 Burbank Blvd. 9:00 P.M. Three live rock 'n roll bands will perform following the movie. Club CIA is the very place where Calistra was married back in October 2002. (Click the HTSA button for all the details.) So now the darling taxidermied girl will have come full circle. Oh, by the by, a special 13 minute version of "Who Is Calistra Zipper?" was finished on February 1st and ANOTHER series of finishing touches and fine tuned edits to the full length feature was at last completed on March 13th. Some footage from the 89 minute and 93 minute versions were restored, but with additional trims the movie now runs 85 minutes. Whew!

A special screening of "CZS" was presented at the downtown independent theatre in Los Angeles on December 9, 2008. Further editing ensued and on January 17, 2009 an 84 minute version was completed, as well as a 25 minute mockumentary "Who Is Calistra Zipper?" On February 5th, Zero Film Festival announced that "CZS" has won a Purple Heart Award for 2008.

I just haven't been able to fix a "finish date" to my digital video editing. June 1st? No, not the last edit. Continual improvements made up to July 16th for the July 28th screening which was a great success. Though some audience members lamented not seeing the Calistra Reveal stating that if they came to see "The Creature From The Black Lagoon" they wanted to see the Creature! Later on, more and more confessed to wanting to see Calistra in all her glory! So I have added the Calistra Reveal. The full length version runs 93 minutes. Photos of the July 28th screening can be found at the end of the HTSA page. Distribution? Future plans? My career? Little Craigie just may go on hiatus for a while. Or underground forever. Or off to foreign lands. Time, Master of us all, will tell.

Monday night, JULY 28, 2008 is the date for the first public screening of "THE CALISTRA ZIPPER STORY." This historic event will take place at THE BUNGALOW CLUB 7174 Melrose Avenue, two blocks west of La Brea in West Hollywood, CA 90046 at 8:30 PM. The screening is free at this swank bar/eatery. Come one, come all! 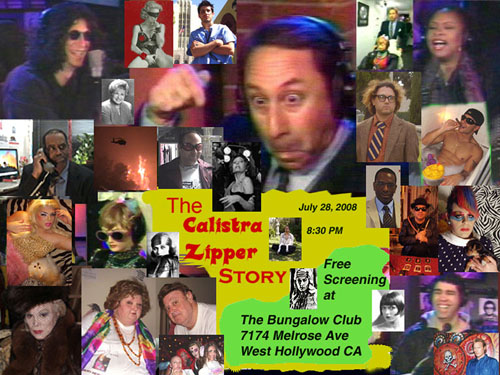 JUNE 1, 2008: On April 14th I prematurely announced the completion of the editing of "THE CALISTRA ZIPPER STORY." As usual, my wild eagerness & supreme enthusiasm took over when I made this announcement, but in the cold light of day (or the harsh night in the screening room) I realized that I had to do additional work as the movie was NOT quite finished. Another few weeks of fine tune editing were required to really bring the movie to its true culmination. Now it is done, a labor of love that stretched from January 2007 when I first decided to make this movie, to June 1st, 2008 when I completed the editing. Ah, the long, long hours! Now I can sigh with relief . Now it is time to let the world judge this, my experiment into pop culture. I am blessed to have had the creative participation of such underground pop celebrities as Candice Cash and Sham of Hollywood as well as the incomparable Alexis Del Lago, that notoriously glamorous personality from Andy Warhol's Factory of the '60s. My deep gratitude goes out to all the 15 actors and to the musicians, tech support personnel, moral pillars, soothsayers and even the negative ones who spurred me on. I also thank the various non-human all-stars who contributed their talents to this worthy cinematic endeavor. Calistra's cause has been served to the best of our abilities and my modest hope (wretched word!) is that this unique movie will help mankind in its continuing struggles. The fact that the completion occurred on Marilyn Monroe's birthday solidifies my confidence in the merit and value of "THE CALISTRA ZIPPER STORY" as Calistra does indeed belong to that pantheon of eternal feminine beauty alongside Marilyn, Garbo, Marlene Dietrich, Gloria Swanson, Pola Negri, Louise Brooks and Anna Nichole Smith.

APRIL 14, 2008: EXCITING ANNOUNCEMENT! "THE CALISTRA ZIPPER STORY" a unique digital video feature created by yours truly and a remarkable cast of talents is now complete! Five months of filming, nine months of editing and the baby has arrived! Click on "HTSA" button on the upper left of this page for full details.

(Don't forget to click on those other golden buttons as well. Some lame brains don't realize that vast new worlds will open up by clicking on each of those 10 buttons. They see my home page and think that's it!)

Summer 2006: Filming a special video project as General of the Vampire Army. Below is a still from an intense encounter over a game of chess with my challenging Captain: 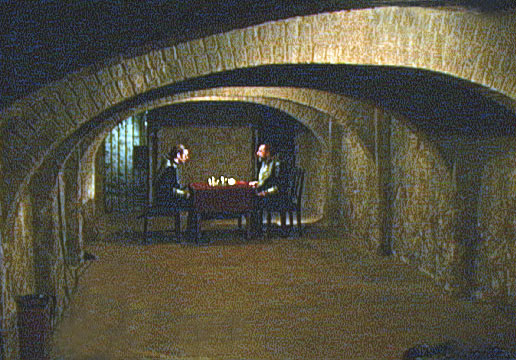